What does HPE mean? The NexXxos HPE-30 radiator uses the same materials as the previous NexXxos models, but technically goes a step further. Due to the condensed internal construction, the number of water channels and copper fins could be increased. This means that a larger volume of water is in direct contact with the cooling fins and the heat transfer is enormously improved. Due to the higher number of fin rows and their shortening, the cooling surface is also used much more efficiently. Comparison tests (test setup: Asus Primex299/Intel i9 10900x with 350W waste heat) with the conventional NexXxos radiator have shown that a significant performance increase of 4.5K is possible when using the HPE radiator. At higher ambient temperatures and higher fan speeds, the performance gap to the normal NexXxoS radiators even increases progressively and reaches a possible performance increase of up to 6K. There has never been such a leap in performance in the past!

As usual, all components used come from Alphacool's classic DIY water cooling range and are also used for the most part in the enterprise products for servers. A digitally addressable RGB lighting on the cooler and on the Rise Aurora fans provides for the incomparable look. The Eisbaer LT360 Aurora HPE and Eisbaer Aurora HPE are powerful all-in-one water cooling systems that are as easy to install as an AIO, but offer the performance of a pre-assembled and pre-filled custom loop. Smart and efficient!​
1. Alphacool Eisbaer LT360 Aurora HPE CPU AIO
( >>> shop offer MSRP 159,98 €) 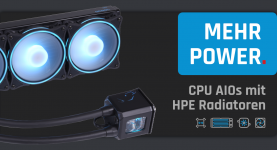