Alphacool today presents the Core XPX/Eisbaer metal backplate for all CPU coolers of the XPX, Eisbaer Solo, Eisbaer Pro and Eisbaer LT model series (solo coolers and AIOs). The backplate is made of steel and is compatible with Intel's LGA 115X, 1200 and 1700 sockets. Due to the material composition of the backplate, the CPU cooler can be additionally stabilised and mounted on the socket with improved contact pressure. This leads to a considerable improvement in cooling performance compared to the previously used plastic backplates. The increase in cooling performance is most clearly measurable with Intel's socket LGA 1700.
​

If you provide a proof of purchase for a CPU cooler of the XPX, Eisbaer Solo, Eisbaer Pro or Eisbaer LT model series (solo coolers and AIOs), Alphacool will send you a Core XPX/Eisbaer metal backplate free of charge! More information about the procedure can be requested via email to Alphacool Support (info@alphacool.com). 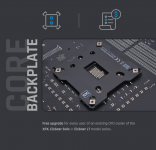