Okay was coming time to EOL on my previous rig (i7 970).
Was going to carry over my Zotac RTX 2060 (because newer cards are frickin' unobtainium and my keyboard (Logitech G510).
My current case was a Thermaltake Core X9 (original black).
These, too, seemed unfindable.
Then I managed to source one NIB in LA. They were trying to sell locally, but I managed to talk them into shipping me one.
I basically removed the window panel and went with the filtered panels on both sides.
It helps hide any light sources in the case.
I didn't want light show. I like my cases dark, and any LEDs to be controllable. 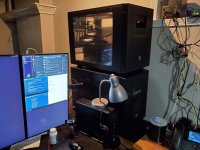 Now, on my previous rig, I'd gotten away with a 280mm AIO setup.

On this rig, I'd been planning to go for a custom loop setup. As I'm running a Ryzen 9 5950X.
Unfortunately a bunch of medical bills decided to mess with my free cash.
So I just went and got the largest AIO available to me. 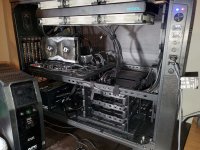 Did a full-case fan-swap. Case fans and the rad fans are Noctua Redux 140mms.
Swapped the OEM 200mm front fan for a pair of Noctua Chromax 200mm fans.
All of them speed governed for maximum quiet.
Went push-pull for the same reason. Can crank down fan speed because I still get plenty of air movement.
Found a motherboard with the features I wanted. 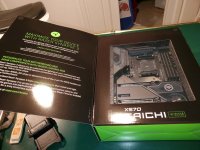 Tossed in three SSDs and bought 4 10 TB drives for a Synology NAS. 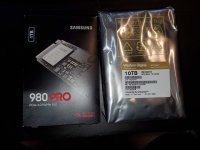 Also upgraded my bar-arm monitor mount to a gas shock arm setup. Makes leveling and placing the monitors as I want MUCH easier.

All in all though, it's a fairly stealth upgrade.

"Finished" this up in early May.

And around late October the membrane on my G510 gave up the ghost.

So I snagged one of these. 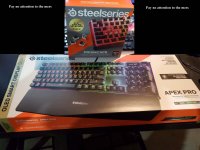 I already use a Steel Series mouse and headset. I like the keyboard, and it means one less piece of control software on the system, sucking useless cycles away.

Oh, and did I mention that I have THE BEST FRIENDS?

One of my buddies at NVIDIA notified me of a new hardware drop into their gear store.
I missed picking up an RTX 3080 by minutes, and can't really justify the price of an RTX 3080 Ti or a 3090.
So I jumped on one of these. 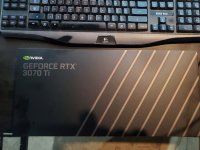 At MSRP no less!

And, control freak me, the FE cards rock because they don't have all that dopey external illumination.

And with that, outside of my monitors, my rig is entirely new gear.

But I still needed to find a way to tone down the effect of the bright power and HD LEDs on the side panel.
I COULD have just moved the panel over to the other side of the case. But that would have made getting to my USB ports tough.
I COULD have Sharpied them. But that just looks ghetto and doesn't eliminate the problem.

HOWEVER. Another option presented itself.
Lots of cars nowadays have start BUTTONS, rather than a keyed ignition.
And to protect them from wear and tear and random (or deliberate) pushes, they make covers for them.

I figured I'd give it a try. 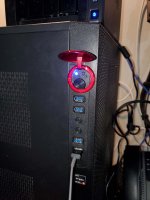 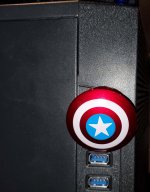