For more than a decade, Alphacool's NexXxoS Full Copper radiator series has been one of the most powerful radiators on the market. With their incomparable performance, the radiators can easily dissipate even extremely high waste heat and have become indispensable in many areas of the cooling industry. Nevertheless, with the NexXxos HPE generation, it's time for the next evolutionary step!

What does HPE mean? Alphacool's NexXxos HPE radiators use the same materials as previous NexXxos models, but take it a step further technically. The number of water channels and copper fins inside the radiator has been increased. This means that a larger volume of water is in direct contact with the cooling fins and the heat transfer is improved enormously. The higher number of fin rows and their shortening also makes much more efficient use of the cooling surface. Comparison tests* with the conventional NexXxos radiator have shown that a significant performance increase of 4.5K is possible when using the HPE radiator. At higher ambient temperatures and higher fan speeds, the performance gap with the regular NexXxoS radiators even progressively increases, reaching a possible performance increase of up to 6K. Such a performance leap has never been seen in the past! 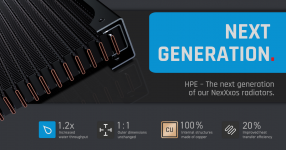